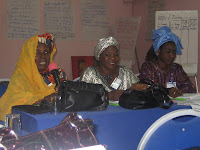 Women in Senegal are in general confined to traditional roles. They are married at a young age; half of them live in polygynous unions and are subjects to multiple childbirths. According to genderindex.org, “Up to 20% of girls undergo Female Genital Mutilation. Most women in Senegal have no educational opportunities. Only 23 percent of females over 15 years of age are literate, while the rates for males over age 15 are 43 percent.”

Additionally, discrimination against women is pervasive, especially in rural areas. The Government frequently does not enforce anti-discrimination laws.
It is against this context that the Senegalese feminist forum was held between 7th-9th August 2009. The meeting brought together 30 women from different back grounds including community based women’s representatives, women’s human rights activists, writers, film makers, lecturers and women from the development sector.

The objectives of the Forum were:

The Forum was held because there is a need to strengthen the feminist movement in Senegal, create feminist spaces and to put the feminist movement of the country on a solid ground. Feminists in Senegal want the women’s movement to be dynamic, the forum was to help strategize to include the youth in the feminist struggle as the leadership believes, the youth are the future and they should take up the work of fighting for women’s rights. In spite of constant struggle, Senegalese women are still oppressed by patriarchy. Patriarchy can be defined as a social organization marked by the supremacy of the father in the clan or family, the legal dependence of wives and children, and the reckoning of descent and inheritance in the male line; broadly : control by men of a disproportionately large share of power or simply a family, community, or society based on this system or governed by men. In Senegal, patriarchy cuts across every sector of life; socially, economically and culturally. Women in Senegal are raised in a society that sees the male as the head and only occupant of a leadership position, women are taught to revere their male counter parts and always put them first. With this kind of outlook gaining access to strategic positions in the country becomes difficult. According to www. afrol.com “Senegalese law stipulates that women and men should have equal access to bank loans, but in reality women often struggle to obtain loans.” In Senegal, women are seen as second class citizens. “Senegalese law grants equal property ownership rights to men and women. Women are legally entitled to access to land, but tradition makes it impossible for them to inherit land. Similarly, women may be in a financial position to have access to property other than land, but their husbands can restrict their ability to exercise this right.”

Senegalese women are demanding and claiming their rights, organizations like Groupe de Recherche sur les Femmes et les Lois au Senegal(GREFELS )and Association of African Women for Research and Development (AAWORD) are leading the way by supporting to increase the autonomy of women and linking them with feminist and progressive groups, to build a powerful African women’s movement linking human rights to the theory and practice of development and to bring forth African Women’s contribution to sustainable and democratic development. The Senegalese feminist Forum sought to re-echo the voices of these women. During the meeting challenges of the feminist movement in Senegal was bought to the fore. A key challenge is the issue of religious fundamentalism. The religious system of Senegal hinders women from being bold enough to express them selves and their views.

Another challenge that came up during the meeting was the inability of people or women to affirm that they are feminist. Women identifying them selves as feminists is a challenge in Senegal, according to Marjorie Mbilinyi, board member of Tanzania Gender Networking Programme “feminist are fine with the feminist struggle as long as there is no struggle” these women do not want to own their identity as feminist, they do not own the challenges, threats, difficulty and opportunity that goes along with owning an identity as a feminist.

In solidarity, the AWDF funded the forum with a grant of US$20,000. The AWDF made a presentation on the charter of feminist principles. The charter serves as an accountability mechanism for feminist organizing on the continent and is a tool for peer review amongst African feminist organizations.

The general belief behind the African Feminist Forum is to create an autonomous space for feminists with no, ”ifs”, “buts” and “however”. The Senegalese feminist forum provided a safe space for feminists in Senegal to dream and do things differently by creating an autonomous space for Senegalese feminist, to domesticate the charter of principles in Senegal, to have a body of knowledge reflecting feminist agency that can be shared with feminist s around the region.

One thought on “The Senegalese Feminist Forum: A Perspective”